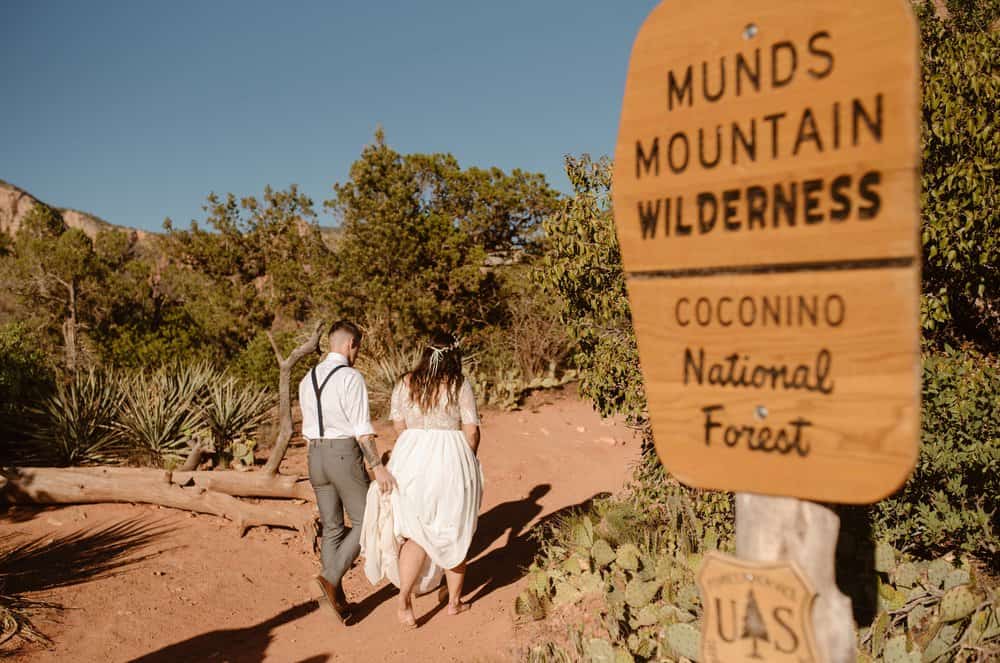 This Sedona elopement was a little extra special. These two were recommended to me by several past clients and since I have been connected with their whole inner circle, proving it is just a crazy small world. A brother of a past client and best friend of this client were witnesses at this elopement. Then a client from a past wedding and adventure engagement session were also witnesses at this elopement. The crazy connections got deeper when I realized we were camping at Camp Avalon the night of the elopement. This was the very first place I camped at in Sedona and would be my last until I return in late fall from my van life travels. It is also Garrett and Izzy’s go to camping spot in the area. It has a super neat root house which you can camp on top of, gardens, yoga classes and a personal water hole in the form of an epic creek running through the desert.

This elopement was super special to me going past those connections. Izzy and I became super close friends from those first initial emails to the coming days of her elopement. We have had many hikes, campfires, ladies camp-outs, brunches and more together since meeting at their engagement session. She was there for me through the process of buying the van and she even popped her first and the van’s first bottle of champagne while helping me paint the interior and hang up some art. This was the first elopement that I was a guest at, but I was also the hired professional. It was the first elopement where I knew everyone there and had relationships with them too. I have to say being a guest at an elopement is just as special as I find my job to be or find the experience the couples have that elope. It is so nice to go with the flow, no stress, be outside, adventure, be able to do not worry about time lines, seated dinners or forced dances. It is just like any other day in your lives together, but more special and meaningful. It is truly an honor to witness an elopement and share such an intimate day with a couple.

Izzy and Garrett are one of those rare bird couples that have been together for seven years, making them high school sweethearts. Garrett is a go-getter, he will make anything happen that needs to and have fun while doing it. Izzy is a sweet, loving spirit in tune with those around her. Their love for each other still feels so fresh and exciting. You can tell they are truly best friends with each in highs and lows. Since their initial emails with me they knew they wanted to get married at Bell Rock in East Sedona with their two pups and just their closest friends. When I sent her my questionnaire I was so excited because she had attached a bunch of images of the two of them on adventures and their pups! I knew they were stoked about their elopement and this day together. I loved that the two of them knew exactly what they wanted and everything went perfectly.

We all arrived at camp and set up for the evening before heading to the elopement location. Izzy hung up this cute just married sign between the trees near her and Garrett’s tent with little lanterns. The guys got ready first in my van with finishing touches by the bride. The guys and I set out for the location with the pups, Alou & Mabel, so the girls could get ready without ruining the first look. We got the trail head, lucky to find parking on a holiday weekend. Once we were ready to set out I picked a location for the first look and Garrett and his men put the flower collars, made by Izzy’s grandmother, on the dogs. Once the ladies arrived and Izzy headed for Garrett to do the first look the dogs got so excited and were jumping towards Izzy and howling at her, Mom was getting married! The two shared a couple of intimate moments together as their friends watched on from the main trail head and the dogs circling them.

We all hiked to the exact spot that Izzy and Garrett had selected months prior just off of Bell’s trail. We had 360 views of the red rocks, cathedral, holy chapel and of course bell rock. It was a clear beautiful day and the sun was just beginning to set. We got all ready for the ceremony and realized the flowers all the girls had put together themselves were left behind in all of the excitement. Jen and Jess ran back to get them and we began the ceremony. Izzy and Garrett’s friend, Adam, became an ordained minister just so he could marry his two friends. His prepared words were perfect for the couple, recalling memories and reciting Bible verses that mean a lot to the couple. Then the two shared vows that they had written themselves, exchanged rings and sealed the deal with a passionate kiss or five, lol. Their friends cheered and smiled as they watched. After some formal and fun photos of the whole bunch we set out for Izzy and Garrett’s pictures together.

In prep for the elopement day Izzy had mentioned to her one of the most important photoa was a family photo, the two of them with their two sweet girls. I think the girls knew it was an exciting day and did so good posing near mom and dad. They stayed near by as Izzy and Garrett shared their first dance together and even ran across the desert with them several times. Once pictures were done the guys set out to pick up Chipotle as us girls headed out to get celebratory beverages for the night. Once we got back to camp it was business first, we had to sign the marriage license. Adam, Izzy, Garrett and their two witnesses signed under the pretty string lights and just married banner in the dark. Everyone gathered around them with their phone lights so they could see what they were writing. Then it was dinner time and time to hang out near our “fire.” There was a fire ban in that area in Sedona that evening, so we set up lanterns and coals and all gather close.

Prior to the elopement day we had discussed doing a Milky Way star photo by Cathedral Rock later in the evening. Izzy and Garrett and I set out with one of our friends driving us there and dropping us off to get more coal. Little did Izzy and Garrett know we had all pulled together for a special surprise. They had brought a cake in the cooler to camp for after the elopement, but when we got back to camp for dinner the cake had ruined when the ice melted. Bryan made it to the store with only three minutes to spare of them closing and got a new cake before returning to pick us up at the trailhead. Later in the car after star photos Izzy thanked me for dragging them down the trail at night because it was one of her favorite parts of the day. She mentioned it was probably the closest and most connected she felt to her man that day, because it was just the two them. No one else there and they had to be still and close together. It gave them time to just be together and reflect on their wedding day in a romantic way under the stars. We returned to camp to finish celebrating and the Milky Way followed. We took advantage of this and did star photos for all the couples and yep, me with the van lol.

The following morning we all awoke from out tents and van, we shared donuts and recalled memories around the “campfire” the night before. Before we all went our separate ways we headed down the to the river with the pups for some fun swinging over the ice cold water. We all departed either saying see you soon or see you later. Another way Izzy and I connected was that this elopement was the end of an era for both us. Izzy and Garrett were moving back home to Colorado a few days after the wedding. They had been in Arizona for five years, which is a big reason they eloped in Sedona. This place meant something to them as adults and to their relationship. As for me, I was heading to Colorado to photograph their reception, but it was also the end of an era for me because I was leaving Arizona for van life travels for several months. Life was changing for us all and I am so happy that I got to share these moments with these people, but also be there to capture their story.

Elopements are epic. No matter if you are camping the night of or staying in an Airbnb. They are super fun even if it’s just the two of you or you and a few friends and family. They are meaningful even if you have never been to the location you are eloping at or if you are eloping some place you two have adventured often together. Elopements are unpredictable. Things happen, the camp site doesn’t give you the space you booked, the flowers get left or the cake gets ruined. At the end of the day they are perfect in every way, you make amazing new memories, you see an epic sunset or sunrise, you laugh until you cry, you stand still in the night star gazing.

book me for your elopement <3 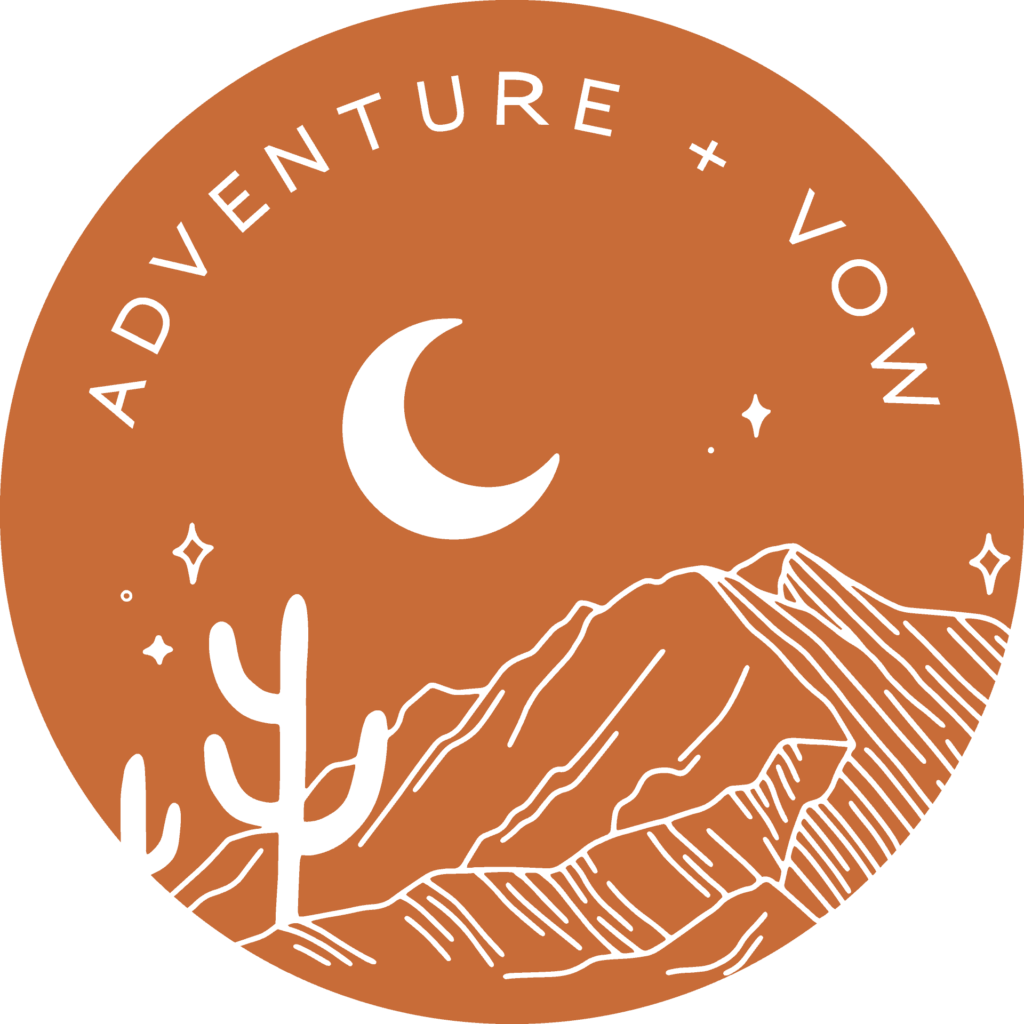